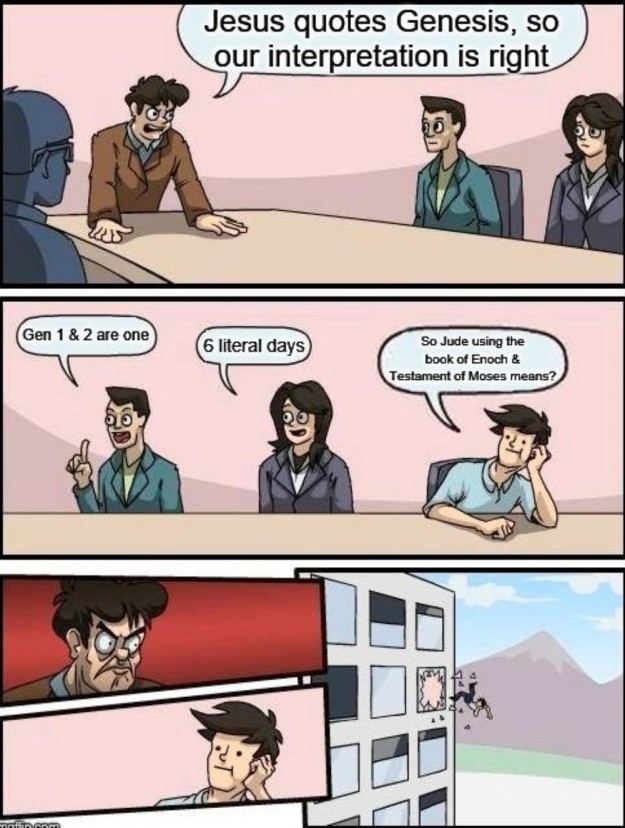 Genesis literalists make much of Jesus quoting Genesis 1 & 2 in one incident. This proves much less than they claim.  But let’s run with the ‘logic’ for a second.  Jude quotes from the apocryphal book of Enoch in v 14-15 and alludes to it in v6.  Jude also refers to another odd book – the Testament of Moses – in v9 (and probably alludes to it several other times).  Should we then take these odd books as authoritative?  Should we accept they have authority because they are quoted under inspiration?  The use of texts was more nuanced than the literalists realise in their rush to disprove “evilusionists”.

Literal creationists spend more time talking about Adam’s nature than the Bible does. What does the Bible say? Probably the longest description of Adam is in 1 Corinthians 15:43-49. Paul is talking about our pre and post resurrection bodies. He calls up Adam (Gen 2:7) as evidence of our temporary nature, our mortality. That’s inconvenient that Adam pre fall is included in a description of bodies needing resurrection and changing. With a simple highlighter you can pick out the key qualities of the two bodies Paul describes. END_OF_DOCUMENT_TOKEN_TO_BE_REPLACED

A lengthy article from The Believer Magazine Vol 2 number 13 1973.  The article works through what unity means in the Bible as well as the actual goings on in Australia at the time.  An interesting historical piece with current relevance:

END_OF_DOCUMENT_TOKEN_TO_BE_REPLACED

We don’t know who made this.  We do know it’s funny. 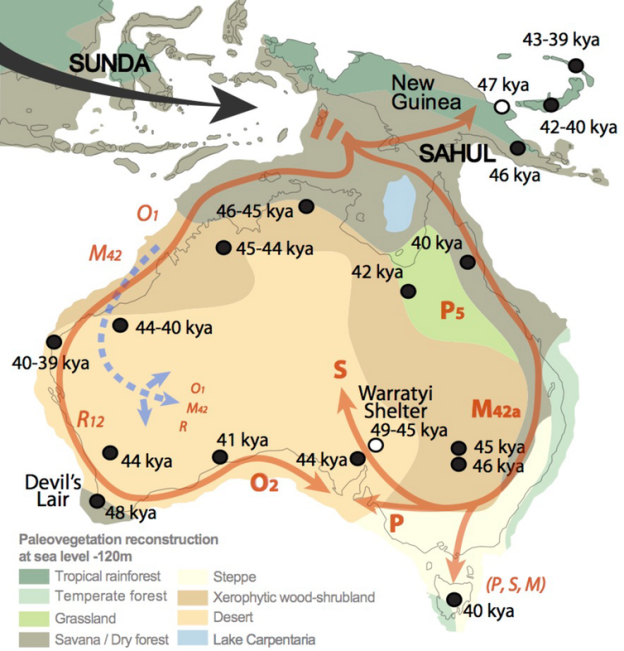 Australian history is an unbroken 55,000 year tale of our first peoples.  Archaeology from multiple sites closely correlates with genetic evidence to confirm the Aboriginal stories  of long association with the land are right.  Literalists can shut their eyes and demand everyone descended from a single couple 6,000 years ago until the cows come home.  The facts say they are reading Genesis wrong. See here for a short summary then go fact exploring 🙂

Contrary to the assumption of Christian doctrine, Genesis 3 never characterizes the eating of the fruit as evil or as sin, disobedience, or transgression. This sort of language is missing from the story. The language of morality is entirely absent from this account’s assessment of the first human parents. The terms that Genesis 3 explicitly names are critically important starting points for understanding the story. Rather than a story of sin, Genesis 2–3 explicitly relates a transferal of the knowledge of good and evil from the deity to the humans. Genesis 3 arguably offers a theory about what will be named only later in the story, sin in Genesis 4 and evil in Genesis 6. Instead, Genesis 3 itself tells a story before sin or evil were actualized: humans had access to the source for knowing good and evil, they exercised desire toward acquiring that source, and it issued in human fear. [1]
Mark Smith (the author of the above) does acknowledge yes it was sin, there was a commandment judgement etc etc.  But we inject a lot of meaning into the text when perhaps it has a different emphasis.  Something to consider.
_______________________________________________________________
[1]Smith, M. S. (2019). The Genesis of Good and Evil: The Fall(out) and Original Sin in the Bible (First edition, p. 59). Louisville, KY: Westminster John Knox Press.

“Usually, even a non-Christian knows something about the earth, the heavens, and the other elements of this world, about the motion and orbits of the stars and even their size and relative positions, about the predictable eclipses of the sun and moon, the cycles of the years and the seasons, about the kinds of animals, shrubs, stones, and so forth, and this knowledge he holds to as being certain from reason and experience. Now, it is a disgraceful and dangerous thing for an infidel to hear a Christian, presumably giving the meaning of Holy Scripture, talking nonsense on these topics, and we should take all means to prevent such an embarrassing situation, in which people show up vast ignorance in a Christian and laugh it to scorn. END_OF_DOCUMENT_TOKEN_TO_BE_REPLACED