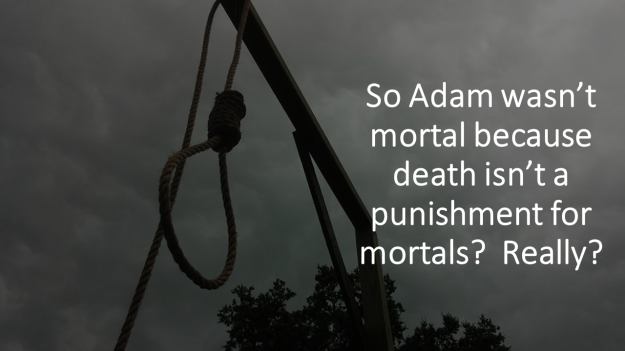 The queue for the judgement seat of Christ will feature a lot of mortals.  Some will be changed in the twinkling of an eye to immortal.  The wicked/sinners won’t be changed but will be exiled from the presence of the Lord and to certain death.  Will any old, frail mortals in the waiting line die before they appear before the Lord?  No.  Despite being a living soul, made of the dust, sustained by the breath of life and having corruptible, weak, natural, earthy body death won’t happen – not before judgement.  The point should be obvious.  Adam was told he would surely die, banished from God’s presence and denied the tree of life.  Death was a punishment, just as it will be ultimately for mortals who know but reject the gospel.

Knowing good and evil is a normal part of human development, as per the biblical use of the term.  Such knowledge was surely necessary for Adam and Eve to image God in the world, to be His co-workers in caring for Eden – maybe even in extending it (?).  The question was not whether the knowledge was needed, but rather the mechanism and timing for acquiring the knowledge. END_OF_DOCUMENT_TOKEN_TO_BE_REPLACED

The Spirit of God hath made me, And the breath of the Almighty hath given me life….Behold, I am according to thy wish in God’s stead: I also am formed out of the clay

Could be Adam speaking but is actually Elihu in Job 33:4-6.  Adam needed to breathe.  Just like Elihu.  The point should be obvious. 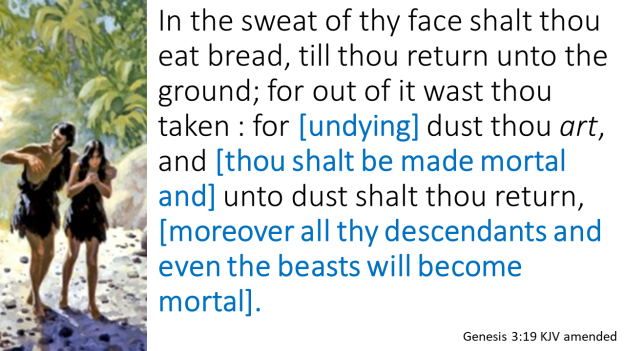 More “corrections” to the Bible from the literalist collection. There’s something quite disturbing about being told we must agree with so-called fundamentals that are not in the text. If so much has to be read in, is it really fundamental?

“If your doctrine of the atonement pivots on a physically inherited quality then the chronological primacy of Adam is absolutely critical. If it depends on a universally shared characteristic then Adam can be seen as an exemplar (in the strict sense) not as everyone’s ultimate ancestor.”

While not speaking to creation, this extract from a 1960 article by Jean Galbraith caught our eye so we thought we would share it.  It suggests (with good reason) why Adam & Eve were necessarily subject to temptation.  Her broader subject was converting knowledge into action via the experience of good and evil. END_OF_DOCUMENT_TOKEN_TO_BE_REPLACED

The focus on Adam in Genesis largely misses the point that we are all adam.  Scripture clearly aligns all humanity with the first couple in its language.   Rather than obsess over biology, we should rather take the point of the demonstration of human failure and divine grace which Gen 2-3 portrays.  We can chose to be in Adam or in Christ.  Focussing on the later would be healthy.  Following is a brief exploration of the way scripture links us to Adam… END_OF_DOCUMENT_TOKEN_TO_BE_REPLACED