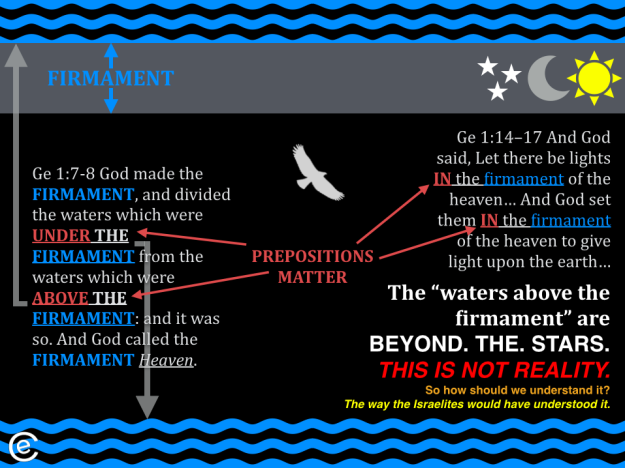 One of the challenges in reading Genesis 1 as a literal account of exactly what God did is the firmament.  The subject raises intense debate because many modern and (seemingly all) ancient scholars believe the Hebrew indicates a solid dome rather than an expanse (or sky).  This creates enormous trouble for the literalist and passionate comments as a result.  However the original readers had no such trouble.

This understanding of the sky as a solid entity holding back water was consistent with the conceptions of ancient people.  Commenting on the firmament, Bro Wilfred Lambert (a noted Assyriologist) drew a specific comparison to the Arkkadian creation myth “Enuma Elish” which has a similar sky barrier holding up water:

“All water known to man either comes down from the sky or up from the ground. Hence, the sky must be water. The first chapter of Genesis provides the closest parallel to the division of cosmic waters. On the second day of the week of creation, God put a ‘firmament’ between the upper and lower waters, which corresponds to the ‘skin’ in Enūma Eliš IV 139”[1].

Similarly the Egyptians understood the sky as a solid barrier:

“the sky, depicted by Nut’s body, was believed to be somewhat solid to the extent that Nut’s body is able to hide the sun during the night. Likewise, the sky is able to restrain the waters above from invading the earth. Yet there were also holes in the canopy—stars—through which the sun shone during the night. Moreover, some Egyptians may have thought that the sky was made of polished iron (the Egyptian equivalent of “firmament” is bia, and “iron” is biat)”[2]

The Septuagint translators used a word meaning solid and are accused by conservatives of having fallen captive to Alexandrian science and compromising their translation by modern conservatives.  This is a significant slur against translators who were far closer to the original language than we are.  In fact the LXX translators are stated by translators today to have made a remarkably faithful copy, the general view is “the predominant characteristic of LXX Genesis is to conserve its presumed Vorlage”[3] and further on this specific issue Scarlata notes:

“There are also a number of calques and loan-words in the Greek text of Genesis. Some of these include διαθήκη (= ברית) ‘covenant’, κύριος (= יהוה) ‘Lord’, and στερέωμα (= רקיע) ‘firmament’.[4]

Ie rather than melding in Greek science, the Hebrew translators invented Greek words where necessary to do the job.  Criticising the LXX is even braver considering the LXX was regularly quoted by New Testament writers – what better endorsement could be given of the work generally?!

In commentating on Genesis, Josephus described God as placing “a crystalline [firmament] round it”[5].  Philo (another first century Jewish writer) described it as the solid barrier between God’s realm and the physical world we know, saying “the first portion of it, being also the most excellent of all made by the Creator, was the heaven, which he truly called the firmament, as being corporeal; for the body is by nature firm”[6].  This was and remained the Jewish understanding for centuries, along with the early Christian understanding (as witnessed by the various early writings we possess).

Until science provided the model of cosmology we understand today, Bible readers and translators were united in reading firmament/raqia as a solid sky.  Tyndale and Luther, both respected translators, went for firmament/solid just as science was starting to demonstrate otherwise.  Luther for his part roundly condemned the new-fangled ideas which contradicted Scripture:

“Indeed, it is more likely that the bodies of the stars, like that of the sun, are round, and that they are fastened to the firmament like globes of fire, to shed light at night, each according to its endowment and its creation…we must believe them and admit our lack of knowledge rather than either wickedly deny them or presumptuously interpret them in conformity with our understanding”[7]

A detailed analysis is conducted by a non-Christadelphian, Paul Seely in the following paper:https://faculty.gordon.edu/hu/bi/ted_hildebrandt/otesources/01-genesis/text/articles-books/seely-firmament-wtj.pdf   The scriptural argument presented is convincing.  Essentially this demonstrates Genesis 1 was written in a way which accommodated the various misunderstandings of the surrounding world – a fact that shouldn’t challenge our understanding and faith in the inspiration of the Word.

Post science, the understanding of firmament/raqia amended in most texts to ‘expanse’ despite the lack linguistic justification for the change.  This was not universally adopted, some scholars like Gesenius maintained the ancient view of the word as per below:

This is consistent with the research of modern scholars and nicely supported with scriptural quotes (unlike conservatives who try and make the word mean ‘expanse’ with disregard for scriptural usage).

However, even if we consider for a moment (despite the indications of normal Bible study) the literalist explanation of firmament (Heb raqia) = expanse = atmosphere it raises many problems:

The literal reading of Gen 1 just in this word firmament/raqia is problematic.  To reference Bro Walker (who 104 years ago did not accept evolution) – perhaps we should “revise somewhat our interpretation of the brief cosmogony of Gen. 1.; but should not waver as concerning its divinity”[10].

4 thoughts on “Genesis 1:6 and the Firmament”